It is always interesting taking a poem to a workshopping group. although sometimes it can be a little nerve-wracking. You can never anticipate how other people will read your poem or what they will read into it. The poem I took to my group yesterday was about a specific memory - but what I found interesting was that when the others read it they saw it as fantasy rather than a memory.  Thinking it about it afterwards I realised that the poem has many layers but these layers are not all easily apparent to the reader. The first idea is that life is viewed as a map or a series of maps, the second is that memory is used as a means of escape from unwanted thoughts - here memory is also used as a kind of fantasy - although the fantasy is something real that is remembered.

Here is the first few lines (but bear in mind it does need a lot more work:

If you travel far and fast enough
you might even escape
the unrolled map of your childhood,
you might sneak off its edges
and into some dream of narrow lanes
high hedges, man made hills.
In a place like this
you might find yourself
under a canal bridge with a small boy
blowing on a harmonica beside you,
watching birds skimming the water...
In the poem at the moment the idea of the map is in the first and last stanza but not in the ones in between and it was suggested that more could be made of the maps which I think is an interesting idea. I was not worried that they viewed it as a fantasy rather than a memory - the beauty of sharing is that sometimes other people read something in a completely different way than the writer intended. Some people get irate about this but I don't mind it - if I did I would simply re-edit to try and make my meaning more implicit.
Posted by Julia at 23:48 No comments:

Last night I gave a short reading (three poems) at the "Salon" event at The Arts Centre. The Salon is run by Writers' Centre Norwich and is primarily a networking event with a couple of short readings.  I was very nervous about reading as it was not really a "poetry crowd", but I had some great feedback afterwards.

One man I talked to wanted to discuss the meaning of my poem Telephone Box - he thought that the message I was trying to convey was that it is harder to talk to someone who is far away than someone who is nearby - say in the next house.  This is an over-simplified view of the line in question: "it is difficult to talk over distances and mean anything" - I think that the meaning of this line is less literal but more metaphorical, it is emblematic of human relationships and the difficulty of human interaction.  I believe that it is more difficult to communicate effectively over any distance, big or small, than it is to communicate with someone face to face.  However greater physical distance also affects the way the mind views the separation and this can increase the potential for miscommunication and feelings of alienation.

The fact that the conversation in the poem takes place in a telephone box serves to increase the sense of isolation and disaffection of the speaker. There is, however, a deeper meaning than the one conversation. The poem could be said to be about the wider human experience of miscommunication and alienation - experiences that go beyond those of a phone-call but that can happen when you are speaking to someone in the flesh. With human interaction there often comes a large or small level of evasiveness and a lack of complete honesty. People also understand and interpret one another's words in terms of their own experience (ego if you like) and their own particular state of mind at the time the interaction takes place.  We also look for hidden meaning in one another's words using the tools available to us - reading of facial expressions, what we know about the speaker and their history etc.  All this means that even when you are talking face to face there is plenty of room for misunderstanding, misinterpretation and consequently alienation.

I chose the vehicle of the telephone call to convey this idea of how humans have trouble communicating with one another - the telephone box itself reinforces the idea of separateness, how ultimately we are all alone.
Posted by Julia at 13:36 No comments: 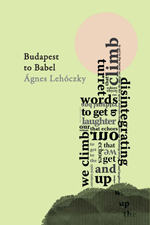 The other thing that is nearly always guaranteed to trigger writing for me if I am feeling creatively constipated is reading.  If you don't read other poets you can't be a good poet yourself - I really believe it as simple as that! It would be a bit like trying to create art without ever having seen any art or knowing what art is. For me it is a vital part of the creative process. I do, like anyone else, have those times where I try to read book after book and nothing inspires me and in those times I usually turn to the few favouritess that I go back to again and again. I have a whole host of favourite poetry books, but there seem to certain ones that galvanise me into wanting to write more than others - I'm not sure why those books in particular - it must be something about the voice or the writing style. Two such books are Budapest to Babel by Agnes Lehoczky and Like Something Flying Backwards by C.D. Wright.
Posted by Julia at 10:20 No comments:

I seem to be a bit immobilized at the moment by weather and health but I am trying to make the most of it by reading and working my way through a book called How to Write a Poem by John Redmond. It might seem like quite a basic title but actually I am finding it really useful. The chapter titles are what you would expect from this type of book - basic stuff like "Viewpoint", "Image", "The Question of Voices" etc, but they are well written and each chapter has a writing task at the end related to the chapter that you have just read.

I love this kind of book - I think that however practised a writer you are it doesn't hurt to go back over the basics once in a while.  Sometimes you might learn something new or be reminded of something that you have forgotten. I find the writing exercises really helpful too - anything that takes you out of your own thinking rut (and we all have one) has got to be good and occasionally they have inspired a really good poem that I may not have otherwise written.
Posted by Julia at 11:39 No comments: