Writing through the lens of what we know 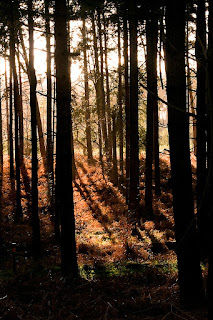 Do we seek to write the opposite of what we know, or do we often use as our "writing muscle" the tools we were given in our formative years? In Contemporary British Poetry and the City Peter Barry suggests the latter - giving as an example Roy Fisher, who in his later life relocated to the English countryside, yet his poetry remained very much located in the urban environments he knew so well. I think there is some truth in this hypothesis - my own writing, for instance, often resides in a small town - a somewhat claustrophobic urban space that is surrounded on all sides by a brooding army of evergreen trees.

I am currently reading Edgelands by Paul Farley and Michael Symmons Roberts and I find myself wondering if the whole town of my childhood is an edgeland of sorts. It is a kind of odd urban sprawl that rather like an over enthusiastic creeper has attached itself to the the few remaining historic landmarks sending out hundreds of shoots and runners. And yet despite this seeming sprawl of housing estates and industrial estates, the Thetford of my childhood was very much contained - contained by the thick and brooding pine forest planted and managed by The Forestry Commission that surrounded it. This inky perimeter gave the town a hemmed-in claustrophobic feeling.

Before the town was eventually bypassed there was a high metal footbridge that went over the All (the main Norwich to London trunk road). The bridge was built to enable pedestrians to pass safely over the road from the estate where I lived to the housing estate, cemetery and industrial estates on the other side of the road, without risking life and limb. As teenagers my friends and I spent many evenings on top of this bridge; smoking roll-ups and weed, playing guitar and just hanging out. The bridge enabled the casual viewer to observe how truly surrounded by forest the town actually was. We had been told it of course, every year or so someone from The Forestry Commission or the Fire Service would come to our primary school to pummel into our heads, through talks and videos, the dangers of setting deliberate or accidental forest fires. They never mentioned the threat to the town itself directly - it was more by implication, but any potential invader would have stood atop that bridge and seen immediately how vulnerable to fire the town was.

The town itself consisted of six or seven sprawling housing estates (mostly council housing, and largely in the 1960s and 70s filled with London overspill families like mine, who had chosen re-location with a job attached over squalid high rises in London), two rivers, a small but thriving town centre and several large industrial estates full of large and small factories. There was also a big golf course, the Grammar School's massive expanse of playing fields and a large common. It is amongst these landmarks - and the more historic landmarks of the town, that some of my poetry resides. Even if it doesn't always allude to it directly there is often a feeling, a sense of it being there in the background somewhere, this odd juxtaposition between rural and urban that I grew up with. It's like a mood or a coloured lens through which I view the world.

You can read my poem about Thetford Forest on the Oxford Brookes University website here.