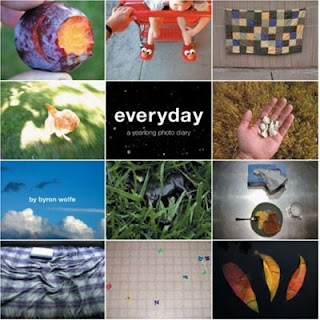 I have been reading this book that I received as a christmas gift. It is called "Everyday" and is a book of photographs by Byron Wolfe. Byron is a photography lecturer and decided to try and take a meaningful picture everyday for a year. Not a mean feat and he just about managed it - I think there only two or three days that he missed and one of those was due to a broken camera.

It made me wonder how it would be for me to try and take a meaningful photograph everyday. There were definite themes that emerged in Byron's work: his children, chickens/pets, fruit trees, washing, mealtimes as well as more abstract stuff like skies and pictures taken in his car.

It made me think about how I woul approach the project if it was mine. Would I want to document elements of the everyday and the threads of my life as a mother/woman/writer etc, focusing mainly on the domestic? Or would I approach it in a more abstract way and photograph elememts of the environment in which I exist which could be either domestic or external to the domestic environment? Or would I marry the two together in some way - or even have them running side by side like different threads of my personality?

It would be interesting to try and keep a log of what day a picture was taken and try and match it up with writing that was written on the same day.

Hello there... care to add your blog at KeywordDir.info?