Editing, Squirrelling and the Narrative Voice 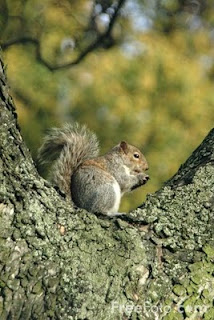 Yesterday was all about editing. After having had such a positive (and helpful) tutorial, I knew that I had to knuckle down and get on with the real work of writing - licking those initial ideas into a more coherent shape. I am a terrible procrastinator but I knew that the time had come to get off of Facebook and into Word.
Although initially I often feel a bit precious about the stanza orders of my poems - they do often benefit from a little reordering. This has definitely been the case with my journey poems because they are highly descriptive poems about moving through particular landscapes it was sometimes hard to find the driving image of each poem and I needed this to enable me to make sense of the poems and order them in a logical way. Instead I found that I needed to look at what the poem was implying but not saying directly. It is not that the poems necessarily have any kind of underlying message but more that there is something going on beneath the surface that is alluded to - for instance in the forest poem the narrator passes through an area of the forest where trees are about to be felled - this can be seen as a metaphor for death - this, I realised during the editing process, is the central image of the poem even though it occurs quite near the end.
Other issues that I needed to confront were those of viewpoint and voice. I had written a poem called Squirrelling using the narrative voice of a squirrel, however, after talking to my tutor I realised that there was some confusion for the reader over who was actually speaking in the poem. In some places it seemed like the person speaking was a human and in other places a squirrel and this needed to be resolved. In other poems I needed to think about tense - sometimes changing the narrative voice of a poem from the third person to the first person can give it new life and energy and it can enable the reader to engage with the work more fully.
Here is the (hopefully) finished version of Squirrelling.
Squirrelling
Wrinkle of fur on small paws
as you rustle the shiny nuts
into the hole that we have prepared.
Fluff of tail as I ascend the tree.
You dig with picky paws
amidst the dried-up leaves and tree roots,
while I run up frosted trunks
ice-picks on my feet.
For now I am content to watch,
later we will dig a frenzy
at every tree foot
trying hard to find our stash.

Very nice. I like it. "dig a frenzy" - I can really visualize that.